Northwestern softball went 3-1 last weekend, splitting their series with Doane University and sweeping a doubleheader with Hastings College. The Raiders are now 10-15 overall, with a 3-3 conference record, setting themselves in eighth place in the GPAC standings. There are 16 games remaining in the regular season as NW hopes to find their way back to the NAIA National Tournament.

In a well-pitched game from both sides, Doane prevailed with a 2-0 win in game one. NW sophomore pitcher Emma Schnell gave up only four hits in four innings pitched, while Doane’s Josie Schnakenberg struck out five batters while giving up four hits to the Raiders. Both runs for the Tigers came in the bottom of the third on a run batted-in, followed by a groundout to drive in the second run. The Raiders tried to rally in the top of the seventh as freshman Bri Giordano singled to start off the inning. Giordano reached third base, but Doane’s Schnakenberg earned the complete-game shutout before the Raiders could string hits together.

In game two versus Doane, the NW bats warmed up, finishing with 10 hits, including two homeruns by senior infielder Amber Schubert. The high-scoring output from the Raiders carried them to a 12-2 victory over the Tigers.

NW took a 6-0 lead in the third inning as senior outfielder Madison Beaver scored from third on a throwing error. Doane broke the shutout by sending two across the plate in the bottom of the third on an RBI triple followed by an RBI single.

The scoring continued for NW in the fourth as freshman shortstop Devin Dreesen sent a single up the middle to drive in a run. The Raiders ended up scoring five more runs that inning, led by a three-run homerun to left field by Giordano. Schnell picked up her fifth win of the season, allowing four hits and two runs and striking out two Tiger hitters in four innings pitched.

The Raiders picked up two more wins over Hastings on Saturday, April 6, winning 6-0 and 8-2 in a conference doubleheader.

In game one, NW sophomore pitcher Samantha Ubben earned her second win of the season by striking out five batters over seven full innings. Schubert hit her third home run in two games, going 1-3 with two RBIs against the Broncos. In game two, freshman pitcher Sydnee Isom led NW, only allowing three hits and striking out two over four innings. Beaver went 3-4 at the plate to go along with strong performances from freshman infielders Jennifer Boeve and Devin Dreesen, who each went 2-4. 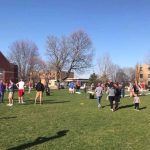