The number one rule of cheer is to stay in between the flyer and the ground.

That is what Sam Callahan learned when he joined the cheerleading team almost two years ago, partway through his freshman year. He did not have any experience being a cheerleader and only considered joining the team after being prompted by some friends who were also on the team.

In fact, Callahan had started out as a football player at Northwestern.  As you might guess, there is a big transition going from football to cheer – a team of over 90 men to a tight-knit group of ladies – and now, Sam.

After skeptically going to try-outs, Callahan was pleasantly surprised at how much he enjoyed it.

“I found out that it was nothing like what I had expected it to be,” Callahan said. “I just got to throw people up in the air and catch them, and it was so fun.”

Over the past two years, Callahan has enjoyed the sense of trust that has developed between himself and his flyer, fellow cheerleader Teagan Hill-Norby.

“I love the trust that develops with your stunting partner,” Callahan said. “I trust that Teagan will do everything she can do not to kick me in the face, and she trusts me to do everything I can to not let her touch the ground.”

The trust developed in uniform has led to strong relationships off the mat, and Callahan is thankful for the lessons he has learned from his female teammates.

“They’ve taught me when people need encouragement and how to give them that,” he said. “If you’re not going to show the highest respect to your female teammates at all times, cheerleading is not for you.”

While cheer provided Callahan with a newfound sense of encouragement, being a male in what is usually characterized as a “female’s sport” has come with its fair share of challenges.

Naturally, Callahan got some funny looks from friends and family when he explained that he joined the cheerleading team.

“The most challenges have come when I go back home and try to explain to my high school friends that college football didn’t work out and I’m a cheerleader now,” Callahan said.

Explaining his new role as a cheerleader to his friends was the easy part.

“The funniest story about breaking down stereotypes is actually when I told my mom I was going to be on the cheer team,” Callahan said. “She had always sworn that God gave her three boys on purpose so she would never have to have a cheerleader or a dancer.”

Just like any passion, blood, sweat and are tears required to make it work.

“Sometimes it’s really tough to stay motivated, especially if things just aren’t hitting,” Callahan said. “New stunts are always a challenge. There’s a lot of falls, a lot of hard collisions, sometimes some blood and a lot of frustration.”

However, it’s the challenges that make the success so much sweeter.“The feeling of finally hitting something new just when you started to think it was impossible is so rewarding,” he said. 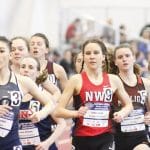 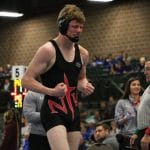