Liz Boel, a senior education major who is now student teaching, hated school when she was young. In eighth grade, though, Boel’s life changed course thanks to a history teacher who taught her to believe in herself. From then on, Boel knew she too wanted to be a teacher someday.

“I want to impact one of my students the way that history teacher impacted my life,” she said.

Boel currently student teaches eighth grade civics at Le Mars Community Middle School. Before her first day in class, Boel had butterflies in her stomach as she worried about how to connect with her students.

“In my education classes, I was just playing school, but this is the real deal,” she said.

However, it wasn’t long before Boel found ways to bond with her students. Many of her girl students took a fascination with her break-apart heart necklace that she shares with her boyfriend.

“I told three girls about it early in the day, and by the end of the day all the girls were asking me about it,” she said.

Many of Boel’s male students idolize her because of her days in track and field. When Boel attended her first basketball game at the school, a group of boys sitting in the audience chanted her name.

Needless to say, keeping middle school boys in line has been a challenge in itself for Boel.

“The boys are just discovering their strength, so they’re always pushing and shoving each other,” she said. “There’s so much boy touching, it’s almost wrong.”

When Boel isn’t combating an influx of testosterone, she’s getting used to her students’ quirks. While one of Boel’s students insists on calling her “nanny,” another manages to divert any intellectual conversation to Transformers.

“For 20 minutes, I couldn’t get this kid off Transformers, all because of the Pentagon building,” she said.

Not surprisingly, Boel has realized that teaching is “an emotional rollercoaster all day long.” She observed how teachers support each other in the teachers’ lounge.

“To do this job, everyone has to work together. Teachers get very close,” she said. “The teacher’s lounge is the one place where they don’t have to leave their garbage at the door.”

Inside the teachers’ lounge, Boel has seen a side of teachers she never knew existed when she was a student.

“They’re actually real people,” Boel said. “They’re not big, bad and scary like we all used to think.”

After getting to know the teachers at LCMS, Boel looks up to teachers everywhere even more.

“It’s made the shoes I’m stepping into even bigger,” she said.

However, the teacher closest to Boel’s heart will always be her eighth grade history teacher. Boel met her at the private school in New Jersey she began attending when her aunt and uncle adopted her. Though Boel entered the school as “a hot-headed teenager,” she changed completely, thanks to this teacher.

“She was the first teacher I ever had who didn’t just give up on me,” Boel said. “She believed I could be more than what I had always been told about myself.”

To this day, Boel still vividly remembers receiving her first “A” report card. Proud of her accomplishment, she ran out of the school at the end of the day to meet her uncle, who greeted her with tears in his eyes.

Before that year, no one in Boel’s family thought she would pass eighth grade. Today, Boel hopes that someday she will change her students’ lives in the same way.

“When you can give a kid hope who’s never had it before,” she said, “it’s the best feeling in the world.” 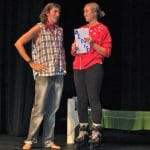 Finding your soul mate in one minute