Home News Finding your soul mate in one minute
News

Finding your soul mate in one minute

Students who attend Northwestern’s annual speed dating event will have the opportunity to win four Netflix packages as well as bonus prizes.

The purpose of this event is to meet new people and have fun.

Some students even choose to take on a different persona for the event.

“Expect people to come dressed as anything; from Santa Clause to Vikings,” said senior Nic Leither.

During speed dating, the men sit on one side of the table while the girls rotate seats.

“I’d like to think this is so that if the guy is too freaky, the girl can easily run away,” Wright said.

“Each pair gets one minute to talk. The bell rings and that’s your cue to switch,” Wright said.

One minute is not very much time to get to know anything about the other person. To keep the conversation moving, students are encouraged to prepare questions.

“Be prepared with possible things to talk about,” said junior Taylor Briggs.

“Prepared note cards would not be bad,” Raysby said.

“It is a good chance for people to relax with all the angst on campus,” said junior Tanya Woodward.

Talking to students of the other gender on campus can cause assumptions about relationships.

“There is a presupposition that you can’t talk to the opposite gender,” said junior Abby Korthals.

Speed may seem pointless to some students.

“You don’t really get to know people since you only talk to them for a minute,” said sophomore Mackenzie Larin. “You most likely won’t remember most of their names or faces.”

For other students, speed dating is a way to make fun of the dating atmosphere on campus.

“People dress up, act silly and ask silly questions,” Woodward said. “I might even go as [my twin] Tara.”

The speed dating tradition has even been included in the O-Show several times.

“We have included it in the O-Show as a quintessential NW event,” Korhals said.

When students go to the event, they might see someone they recognize as dating another person in real life.

“Even dating couples come for fun. It’s not a serious event,” said Korthals. 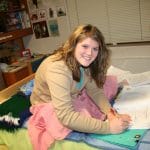