For most sports fans across the nation, Feb. 13 cannot come soon enough. Until then, they will have to wait with much anticipation to watch the Los Angeles Rams and the Cincinnati Bengals square off in Super Bowl LVI.

Kickoff is set for 6:30 p.m. at SoFi Stadium in Inglewood, CA, which is coincidentally the home field of the Rams. According to CBS Sports, Los Angeles is a 4.5-point favorite and will look to become the second team in NFL history to win a Super Bowl on their own turf, a feat that Tom Brady and the Tampa Bay Buccaneers achieved last season.

Both teams had remarkable playoff runs on their way to the big game, and this year marks the first time in NFL history that two Wild Card teams made it to the Super Bowl. The Bengals went 31 years without winning a playoff game before they defeated the Las Vegas Raiders, the number one seed Tennessee Titans and the juggernaut Kansas City Chiefs to claw their way to a Super Bowl berth. On the other side, the Rams beat the Arizona Cardinals, the defending Super Bowl champion Tampa Bay Buccaneers and the San Francisco 49ers to punch their ticket to Inglewood.

Arguably, the biggest storylines coming into the matchup include the two starting quarterbacks: the young Joe Burrow for the Bengals and the veteran Matthew Stafford for the Rams. Although both quarterbacks were both number one overall picks in their respective draft classes, their paths to the top were not easy.

After fighting for playing time in college, Burrow completed one of the best college football seasons of all time at LSU, which ended with him winning a National Championship and the Heisman Trophy in 2019. However, he tore his ACL last season in his first year starting for the Bengals, and Cincinnati only won four games. Nonetheless, after an incredible comeback season this year, Burrow is one win away from a title.

“I think the message Joe Burrow is trying to portray with his insane comeback season is that it doesn’t matter the circumstances, and it doesn’t matter if the odds are stacked against you,” said junior Parker Johnson. “If you go through every day trying to be better than the day before then anything is possible.”

As for Stafford, he spent 12 years as quarterback of the Detroit Lions. Stafford was a great quarterback on a bad team, and he did not win a playoff game in three appearances in Detroit. However, Stafford finally finds himself in position to do something that seemed impossible when he was in Detroit.

“Stafford was always a really good quarterback, but he did not have the weapons to do anything when he was in Detroit,” said sophomore Brandon Lampi. “Now, he is showing just how good he is. He deserves this.”

Both quarterbacks look to add their own finishing touches to one of the most entertaining NFL playoffs in recent memory and prove they belong in the spotlight. 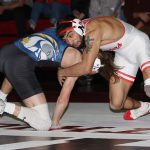