The first of no doubt many live-action releases to come, “Beauty and the Beast” has made its mark as the next Disney gold mine. With over $700 million made worldwide and a 70 percent rating on Rotten Tomatoes, the adaptation is largely heralded as a success.

For those unfamiliar with the plot of “Beauty and the Beast” (a very small crowd, I feel), I’ll offer a quick rundown: Belle (Emma Watson), the daughter of an inventor (Kevin Kline) in a small French village, is a beautiful but misunderstood outcast. After Belle’s father gets lost in the woods, he stumbles upon the castle of the Beast (Dan Stevens) who locks him away for eternity.  Belle goes in search of her father and upon finding him, Belle takes his place and slowly learns the truth about the Beast and the curse upon his castle.

As a generation that grew up watching the cartoon “Beauty and the Beast,” a live-action adaptation is obviously going to have high expectations. The movie certainly lost some of its magic in translation, at least for me, and I often found myself correcting things that I wish were done differently. But, overall, it was an entertaining adaptation.

The casting of the movie was well done and did justice to the version we all know and love. Though Watson does not have the voice of a Broadway star, she still holds her own and perfectly encapsulates the character of Belle, since Emma Watson is essentially Belle in real life. Similarly, Luke Evans made a dashing Gaston, wickedly handsome and nauseatingly chauvinistic.

There were a few characters, however, that were a little lackluster compared to their animated predecessors. Josh Gad, though experienced in playing musical characters with a past in Broadway shows and as Olaf in “Frozen,” made a disappointing LeFou for me. His lines were good comic relief, but it felt like the character lacked some of the passion and unbridled goofiness that I associate with LeFou. Additionally, Lumiere and Cogsworth seemed a little too trapped in their CGI selves to have true character. It was sort of there, but I wanted them to be more outrageous. It often felt like the characters were just on mute compared to the original.

Watching the songs many of us know and love from our childhood done in live-action was certainly impressive and will likely leave you humming along, but try not to sing out loud in the theater. The title song, “Belle,” performed in the village, was sprawling and colorful, and it was impossible to watch without smiling. Similarly, “Be Our Guest” also featured an impressively choreographed number from a candlestick, though it was a little lacking in energy overall.

If you are a fan of “Beauty and the Beast,” I have no doubt that you will enjoy this movie. The plot follows the basic outline, the characters are delightful reinvigorations of these from the past, and the scenery, though not as magical as the animated version could be, still features majestically sprawling castles and rolling green hills.

Even if you are not familiar with “Beauty and the Beast,” it is still a great movie to attend if you are looking for some feel-good, family-friendly, nostalgic fun. 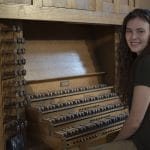