The hills were alive with the sound of a Cappella

Every six years, the A Capella Choir goes on an international tour and this year we took a trip to Denmark and Sweden in May 2022. The choir departed for the airport on May 17 and arrived at Copenhagen the next day.

One of the first things noticeable about Copenhagen was despite it being a city, there were barely any cars on the road. In Denmark, they primarily use public transportation, such as trains and busses or biking/walking to get from place to place as those modes of transportation are much more ecofriendly than traveling by car.

After catching up on sleep and adjusting to the seven hour time difference, they began their first full day with a canal tour of Nyhavn, Amalienborg and Marmokirken. Then, there was some downtime to explore a little bit and try some Danish food, like porridge.

Then, the choir departed for a concert at the Apostelkirken, Apostle church. The first day  ended with a catered meal of lamb, cheesy potatoes and bread. Many of the choir members still think about the bread all the time.

The second day began with a walking tour that was led by Jon Holleson, choral director of Panumkoret, who the choir had a traditional Danish lunch with Holleson at Smørrebrød later that day. Then, they headed to the Karlslunde Strand church to perform their first concert.

The third day was spent in Roskilde and exploring several sites at their leisure, such as a Viking Ship museum, Roskilde Domkirke, the UNESCO world heritage site and Ragnarock/Musicon, a pop, rock and youth culture museum. This day ended with a concert at Tune Center.

The next day began with a church service held at the Bethlehemskirken in Nørrebro, which was entirely in Danish. After the service there was lunch and some more free time before their concert that evening at the Helligandskirken, Holy Spirit Church, which was a favorite for concert locations because the acoustics in the church were incredible.

The fifth day was a free day with no concerts and the opportunity to go and sightsee. All of the members of the choir were provided with several activities, castles, shops and restaurant options that they could go to and explore.

We began the day visiting the Vor Frelser’s Kirke Tower, a huge spiraling tower that overlooked the entire city with crazy views. We then took a train to the Frederiksborg Castle in Hillerød, where the art and architecture was absolutely breathtaking, leading to a garden in the back that I could talk about forever.

There was more free time on the sixth day in the morning before our concert at the Solbjerg church. This concert was my absolute favorite. We got the chance to sing with Holleson’s choir, Panumkoret. We got to speak with them before and after the concert and share some food and drinks with them. It was a great experience being able to meet people from across the world who also share a love for music and singing. The opportunity to share our stories and experiences and learn about each other was honestly one of my most cherished memories on that tour. The choir members headed back to the hostel that night with a huge smile on their faces because of how much joy that day brought to all of us.

On our last full day in Denmark, we had free time for most of the day so we could explore anything we had not gotten the chance to yet, and then held a concert at the Bethlehemskirken.

Our eighth day was a travel day to Sweden and the next day we got to sightsee before our concert in Ansgarskyrkan. The last day was spent sightseeing and shopping before the last concert at the Sankta Clara Church. 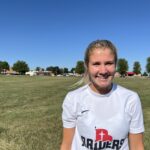 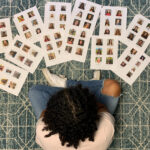