Despite the years since they’ve released a new song, despite the members that have been let go or replaced, despite the explosion of “indie” music that has taken over in those five years they’ve been away, The Shins are back and have fully reclaimed their cult-like following.

Ever since the scene in “Garden State,” an unorthodox film about love from 2004, in which Natalie Portman forces a giant pair of headphones on Zach Braff, telling him The Shins’ song “New Slang” changed her life, the band has enjoyed a prime position in listeners’ hearts. The Shins music embodies youth, rebellious spirits, quirkiness and laid back love.

And although they’ve appeared on TV, in the soundtracks of other movies and even received a Grammy nomination, The Shins have managed to escape the “sell-out” connotation that has compromised the fan-base of many other “indie” musicians from the early 2000s.

It’s that loyal group of listeners that’s made The Shins’ new release, “Port Of Morrow,” such a success.

Even though almost all the members have been replaced since their last release, founder, guitarist and lead singer James Mercer is the only real key to The Shins’ sound. It’s his ever-youthful voice and carefree lyrics that listeners love. It’s Mercer who’s the heart of the band.

Mercer has made the transition into 2012 flawlessly. Although The Shins have always produced albums that seem to be manipulated down to the last little detail from the bass, “Port Of Morrow” goes further than previous albums in its careful controlled production.

The first single released from the album, “Simple Song,” is the perfect example of the new level of detail Mercer and the new members of the group have brought to the album. Setting the lyrics aside, “Simple Song” is really anything but. The guitar dives and rolls all over like a power-pop dance.

Stronger guitars that give off the plugged-in sound take the place of the acoustic chugging of the guitars that used to drive The Shins’ songs. Instead of a few chords played again and again until they’re stuck permanently in the ears, “Port Of Morrow” lets the guitars steal the show with their intricate movements.

Vocally, Mercer has been ahead of his time in creating vocal distortions. Classics like “Sleeping Lessons” showed off his fantastic range, made even more impressive during production. “Port Of Morrow” continues to serve up samples of what he can do.

Unlike “Wincing the Night Away,” their last studio release, “Port Of Morrow” steers clear of singing about the dark or deeply personal. Songs tend to gravitate towards beach scenery and faint memories of a favorite girl. The lyrics are secondary really—it’s the tunes that are going to be whistling around in your head for hours.

It’s not a comeback album, not a journey into the mainstream big-money music scene. “Port Of Morrow” is simply Mercer returning to play again for those loyal fans. 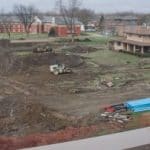