Will Ferrell is clearly an intelligent person behind the scences.

Between his behavior off-screen and his often confusing repertoire of films—ranging from comedies to existential dramas—he isn’t anyone’s dummy and not nearly as stupid or clueless as the roles he is often cast in.

Ferrell’s latest endeavor is “Casa De Mi Padre,” the part-satire, part-homage to what has suddenly become something of a staple in television—the telenovela.

The story is a standard tale of scandalous love and family conflict that escalates into legitimate and extremely armed conflict, and unfolds in a fittingly absurd and gun-filled way. The film makes it a point to bring into play the extremely low budget and limited resources of the telenovelas that it bases itself on.

Most importantly, the movie is funny. It’s funnier than might be expected, considering the premise of the movie basically is the entire joke.

It helps that Will Ferrell is one of the least Mexican people imaginable. It’s the premise for a lot of the jokes that the movie makes, not overtly, but just by virtue of the juxtaposition of his character to the actor himself.

“Casa De Mi Padre” is not a terrible movie at all. It would certainly be no great crime to miss it in theatres, but it is certainly good for a few laughs, especially for Will Ferrell fans. 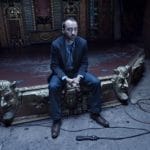