The book will be released on March 1 and is currently available for pre-order on Amazon, Christianbook.com and on the publisher’s website, Hendrickson.com. It is also available in the theatre office for $10.

The book tells the story of Arlene Schuiteman, a Sioux Center, Iowa, woman who answered God’s call in her life. She trained for nursing, knowing that she was called to medical missions. Her career in medicine spanned 34 years on the African continent in the countries of South Sudan, Ethiopia and Zambia.

“This first book is about her time in the South Sudan,” Barker said, “and I’m planning to write two more books about each of the other two countries.”

Barker and Schuiteman met in 2005 as Barker was gathering information about another missionary who had been a pioneer among female missionary pilots.

Barker originally set out to write a play about Arlene’s life in 2005 and ended up completing three plays about her life. He wrote the play “Sioux Center Sudan” about her first assignment in Africa, and then two more plays about her years spent serving in Ethiopia and Zambia.

“I eventually realized that there were many more stories to tell,” Barker said, “and a few years ago, I started writing the books.”

Barker began to write the first book in 2013 and spent three years completing it.

“I contracted with Hendrickson to publish it at the beginning of 2017,” Barker said, “and it has taken a year to work with them through the editing and publishing process.”

Much of the inspiration and content for the plays and books came from Arlene’s journals, in which she recorded much of her time and experiences as a missionary nurse.

These journals helped Barker to expand the first play into a biography about Arlene, and he was able to document her career during her time in Nasir, South Sudan, from 1955 until she was expelled by the Muslim government in 1963.

“Arlene is a careful and somewhat shy person,” Barker said. “It took time for her to trust me. But now she has turned her papers, 70 years of journals and letters, over to me. When I finish with the books, I will turn her papers over to an archive for other researchers.”

Barker has also written several other plays and works including “The Storytelling Church” about reclaiming the role of biblical story in worship, “Kin: The Trial of Carrie Buck” about civil rights and “Unspoken for Time” about sexual assault. 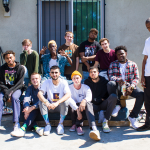 Give metal a chance