Piper Williams is one of these students, but he is a particularly unique student with a wonderful creative journey.

Art has played a “prominent role” in Williams’ life since he was a child. For example, he specifically remembers being “engrossed by tempra paints” as a kid.

“My parents like to recall a time—shortly before a move,” he said. “when I painted a plethora of stylized interpretations of Noah’s Ark on many of the moving boxes. The movers were amused by the mobile gallery.”

As Williams got older, he  became interested in photography as opposed to painting and drawing. He fondly remembers using a purple and teal Vivitar camera every chance he had.

“I ‘booked’ photo sessions with my toys, the house plants, my older brother and occasionally persuaded my parents to sit for me,” he said. “From capturing images to processing film, I was fascinated with the whole process and couldn’t get enough.”

This love of photography would lead Williams to pursuing a degree in photography at Andrews University in Michigan in 2002. However, eventually he dropped out due in part to what he says was a “lack of career vision.” Since then, Williams has continued to use and foster his creative talents while also working in education. For example, currently Williams works as a para educator.

After fifteen years, Williams decided to go back to school to finish his education. He explains that the decision was a bit daunting, not because of doubts about studying art, as many humanities students have but more of going back to school after so much time.

However, he said, “This time I had a clear vision, and having worked as a para educator, I had found a way to do art in a satisfying career.”

So, Williams began to study art at Northwestern—a natural fit as his wife is Dr. Emily Grace, professor of physics. Currently, Williams is a nontraditional Northwestern student who balances school, two jobs, and his family.

Williams has greatly enjoyed his education and time at Northwestern. Ceramics, painting and printmaking have been some of the most valuable classes he has taken so far, and he is very grateful for the instruction of his professors.

“Professor Stokes and Professor Shin have invested a great deal in me and my art,” he said. “In addition, Dr. Kensak mentored me into academic writing while in his Lit class.”

As all Northwestern students know, however, often our fondest college memories are outside of the classroom. Williams is no exception and happily remembers having an impromptu movie night with friends and watching the movie Heavy Trip about a Finish heavy metal band.

Of the pieces he has made at Northwestern, two stick out the most to Williams. The first is a ceramic decorative dish with diamond cut outs and tan, blue and brown glazing. The second is an ink, charcoal and watercolor piece built on two 9” x 12” panels titled “I’m Still Here.”

As for the focus and overall style of William’s art, he explains that “as I have developed as an artist, medium is less important than the themes I chose to work with.” Williams frequently finds inspiration from a variety of sources and themes. He states that his wife is definitely his “greatest muse,” but he also draws from the first half of the twentieth century, his experiences of being a father, hope and truth. 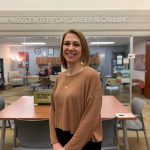