Fynaardt received a bachelor’s degree in English teaching from Dordt in 1990 and married Keith Fynaardt, who works in Northwestern’s English department, shortly after graduation. She and her husband moved to Illinois, where she received her master’s in English from Northern Illinois University.

“After my master’s, while Keith was working on his doctorate, I worked in health care admissions, marketing and public relations for what is now Advocate Health Care, Illinois’ largest health system,” Fynaardt said.

The Fynaardts came back to northwest Iowa in 1995 when Keith first started teaching at NW. During that year, Tamara taught writing classes at both Dordt and NW as an adjunct professor.  In 1996, Fynaardt applied for a job in NW’s advancement and fundraising department, but instead she was offered a position in the one-person communications department.

“After I was hired, we were a two-person department. We eventually became the public relations department, and now it’s called the marketing & communications department and has seven people,” Fynaardt said.

“Together, we are all accountable for attracting, recruiting and enrolling the largest source of NW’s revenue: residential undergraduate students,” Fynaardt said.

Fynaardt never set a goal for herself to achieve her current position, but she is grateful for the opportunities she has found at NW: meaningful contributions, engaging in meaningful responsibilities and creating and implementing marketing campaigns.

“I led the team that developed our Raiders Stand Out brand and have been very involved in getting the brand messaging crafted and launched,” Fynaardt said.

“All of that I believe is why, when my predecessor retired, President Christy asked me to assume this role. I was humbled and excited to accept the challenge.”

“Tamara is an outstanding colleague and leader on this campus. She is smart, wise and kind,” Elliott said. “One of her greatest strengths is her ability to think strategically – to imagine new and more effective ways of doing things. She is highly professional but also approachable. She has a fabulous sense of humor. For all of these reasons, I am deeply grateful to serve with her on the president’s cabinet.”

Despite her history at Dordt, which she often gets teased about on campus, Fynaardt’s family has made NW a second home. As previously mentioned, her husband works as an English professor, but her children have a presence at NW: Kit, who graduated in ‘21 and Gideon, who will graduate in ‘24.

“My mother is one of the most articulate people I’ve ever known,” Gideon said. “Now to correct the record, she has made it clear that Dordt played almost no part in her becoming the accomplished, intellectual woman she is now, but her path as a writer began there and continues still as she uses her skill to communicate effectively in the workplace.”

Fynaardt combines exceptional abilities with her position as president’s cabinet member and vice president for enrollment and marketing. According to her family and co-workers, her great sense of humor and work ethic make her stand out in her position. Professors’ life outside the classroom 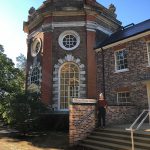