14th ranked Northwestern rolled Dordt in the second half of last Saturday’s football matchup between GPAC rivals on NW’s senior day. NW won the game 41-23 while scoring the game’s final 28 points. This win improves the Red Raiders to 6-1 in the GPAC and 8-1 overall heading into their bye week. NW has one regular season game left at 1 p.m. on Nov. 11 at Hastings College. Following the loss, Dordt is now 2-4 in the GPAC and 4-4 overall.

NW seems to be a second half team so far this season, as they have showed their offensive firepower in the later stages of many games. After trailing in the first half,  down 23-13 with five minutes left in the third quarter, NW scored 28 consecutive points over the final 20 minutes to earn the come-from-behind win.

Freshman Tyson Kooima scored the first of his three rushing touchdowns on a 13-yard run to start the NW rally with 4:31 remaining in the third quarter. This cut the Defenders lead to 23-20. After the Raider defense forced a Dordt 3-and-out, NW needed just three plays to go 63-yards, capped off by another Kooima touchdown run, this time from 8-yards out. The touchdown came after a 53-yard pass and catch from Kooima to senior Levi Te Brink. The Raiders claimed a 27-23 lead and never looked back.

Both teams went scoreless on their next couple possessions and following a fourth-and-one stop by sophomore Tanner Machacek and the Raider defense, Kooima finished off an impressive nine-play, 70-yard drive with a nine-yard touchdown run to bump the Raider lead to 34-23. Another fourth down stop at the Defenders’ 21-yard line set up the Red Raiders’ final score, a two-yard run by sophomore Jacob Kalogonis giving NW the 41-23 win.

NW’s offense proved to be lethal yet again this week, posting 525 yards of total offense. None of this would have been possible without the Big Hogs up front. Brad Mould, junior left guard, helped pave the way for a dominating Red Raider offense.

When asked about his performance, Mould said: “I felt really good out there today. The Defender line had no chance against us.”

Mould was a big part of the Raider offense that rushed for an astounding 307 yards. Kalagonis rushed 24 times for 214 yards and two touchdowns. This is his second 200-yard game and fourth straight game with at least 100 yards. The sophomore pushed his season total to 1,162 yards rushing, ranking ninth on the all-time charts for rushing yards in a season at NW.

Kooima added 13 carries for 84 yards and three touchdowns while passing for 218 yards on 13 completions. With 2,388 passing yards on the season, Kooima moves into seventh place all-time for passing yards in a season at NW. Freshman Shane Solberg caught three passes for 37 yards and TeBrink added two catches for 58 yards. 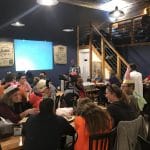 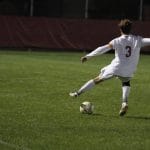