The volleyball squad continued their hot streak in the conference by sweeping both Nebraska Wesleyan and Dakota Wesleyan over the past week.
On Tuesday night, the Raiders beat Dakota Wesleyan 3-0 (25-11, 25-17, 25-20) with a barrage of kills and blocks to improve to 13-13 (6-3) on the season.
Sophomore Megan Hutson led the offensive onslaught, hitting .556 and matching her career high of 12 kills. Hutson also contributed six blocks and went 13-14 on serves. Senior Kate Boersma threw down seven kills and five blocks. Junior Jaci Moret and junior Jennie Jansen also contributed nine kills each.
Moret, normally a back row player, filled in for injured senior outside hitter Rylee Hulstein.
Freshman Kaitlin Floerchinger set up 34 assists and had five blocks.
Dakota Wesleyan only managed to hit .033 in the match and had trouble getting any kills over the front line of the Raiders. The defensive play of NW led to exciting attacks on offense.
Last Friday night the Raider volleyball squad hosted Nebraska Wesleyan. NW came away with a 3-0 (25-21, 25-15, 25-20) win.
Jansen had a well-rounded game, earning 10 kills and a career-high eight digs. Huston provided versatility from the middle hitter spot, gathering seven kills, six digs and four blocks. Kaitlin Floerchinger lofted up 27 assists to go with her 12 digs and five kills.
“Our passes were really on, and that helps us get into the groove of things,” Jansen said. “Once that’s on, the sets are there, and the hitters can swing away.”
Freshman Alexis Bart had 15 digs to lead NW. Junior Heather Goehring and freshman Mikinzie Phillips  were perfect from behind the service line. Goehring had three aces.
“This game was exciting because all the fans got really into it,” Jansen said. “And that’s always great to see and fun to play with.”
This makes three straight games that have been dominating 3-0 victories for the Lady Raiders, which has helped the team get back to .500 on the season. Huston believes the recent roll has been because of an improvement in the intensity of practices.
“Lately in practice we have really been pushing each other in practice,” Huston said. “That allows us to play at a consistent level and not play to the level of our competition.”
NW will try to continue their hot streak on Wednesday when they travel to Briar Cliff for a 7:30 p.m. contest. 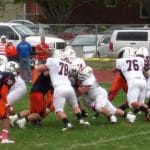