Television commentators overuse the phrase “game of inches,” but for the Northwestern football team on Saturday, those inches made the difference in a 49-42 win over Dakota Wesleyan.

With second and goal and only time for one more play, the Tigers attempted to run the ball into the end zone. Seniors Jermaine Ambrose and Isaiah Twitty stopped the ball short of crossing the plain and the Raiders sneaked away with the shootout win.

Dakota Wesleyan took the lead on their first drive of the game. NW answered when senior quarterback Davis Bloemendaal scored on a 45-yard touchdown run and tied the game at 7-7. The Raiders defense picked up a turnover deep in Tiger territory, and it took only five plays for NW to go up 14-7 on a rushing score from senior Tony Austin.

“When we play fast is when we play best,”Bloemendaal said. “Our tempo really had them on their heels, and we took advantage of that.”

Early in the second quarter, the Raiders introduced a little trickery as Green tossed a 19-yard touchdown pass to senior Bryce Byker. The ball was well thrown, but no rumblings of a quarterback controversy have been reported.

Down 28-7, the Tigers began to take the top off the defense. With two long touchdown passes, the Tigers found themselves within striking distance as the Raiders held a 28-21 margin.

“(The Tigers) have an explosive offense with guys that can make big plays, which we saw,” Bloemendaal said. “If they don’t have those two long passes, I think the game would have been a lot different.”

NW marched the ball down the field and punched in a run from the one-yard line to take a 35-21 advantage. Senior Theo Bartman scored the touchdown. The defense stopped the Tigers’ attack though, and scored a rushing touchdown with 1:49 left in the second quarter.

A Raider punt gave the Tigers another shot to score, but instead a fumbled snap was scooped up by redshirt freshman Sam Van Ginkel and returned eight yards for a touchdown. Both squads scored 21 points in an explosive second quarter.

On the first drive of the second half, NW went up 49-28 on a 14-yard touchdown pass from Bloemendaal to Green. It wasn’t until late in the fourth quarter that Dakota Wesleyan gave the hosts a run for their money.

Two fumbles by NW gave Dakota Wesleyan extra chances to score, which its offense did with 9:55 and 3:32 left in the fourth quarter.

The Tigers hopes for a shot at overtime were legitimate until Ambrose and Twitty made the game-sealing stop.

The Raiders will play their homecoming game at 1 p.m. 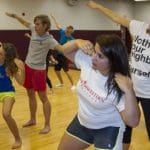 10 years of RUSH to be celebrated 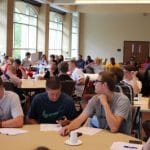