Rahab. Esther. Abigail. Mary. All four of these people are prominent women in the Bible. They were also the main characters in the message that dean of arts and humanities, Karen Barker, shared on this year’s women’s retreat.

“The women’s retreat is an opportunity for Northwestern women to come together in an off-campus environment to worship together, hear some teaching and inspiration, have meaningful conversations and enjoy laughter and fun with one another,” said associate dean of Christian formation, Barb Dewald.

Unlike past years, the women’s retreat was held at First Reformed Church in Orange City and was the first weekend of the semester. In prior years, the women’s retreat has been at President Greg Christy’s house on a weekend later into January, sometimes in early February. But that didn’t stop 54 women from attending, and when others heard that the speaker was Karen Barker, they were hooked.

“When I heard that Karen was going to be the speaker, I knew that the retreat was something I needed to attend,” said freshman Allison Haverdink.

In her first session, Barker addressed the question of who is fearless. She used the examples of Rahab, Esther, Abigail, Mary and the Sinful Woman to show concrete stories from the Bible of women that most may or may not know. As Barker told each story, she emphasized how every circumstance was filled with opportunities to be fearful, but then she showed how the women, despite their circumstances, chose courage.

“Be afraid, then do it anyway,” said Barker.

Some of the women may have had the assumption that the message would be on how to be fearless, but Barker challenged this concept. Rather, she said no one is fearless.

“I was pleasantly surprised when she actually talked about how it’s ok to be fearful and to rely on God to get you through those hard and scary times,” said Haverdink.

She said, “Karen said no one is fearless and honestly that felt like a weight off my shoulders.”

In her second session, Barker asked the women to dive into what their cultural context is and how that shapes their own faith. If they are seeing powerful women figures in their media content, then they are going to feel more empowered. But Barker and other prominent women on campus, including Barb Dewald, Lindsay Hubbell and Caylan DeLucia, felt even with the students’ own role models in today’s media, confidence on campus was lacking.

“Together, we noted how anxious the women on campus seem to be. I wanted to try to encourage women to own their strength,” said Barker.

Intertwined with times of worship and fellowship, it was an opportunity for the women on campus to feel free to be themselves. The worship was vibrant with voices singing out unabashedly. The free time was filled with laughter from games and good conversations.

“As students of Northwestern, we are blessed and spoiled more than I can explain with the beautiful, faithful, passionate Christ followers that we have here in our community,” said junior Grace Spencer.

Barker hopes the women she was able to impact through the retreat will spread the message throughout campus that no one is fearless, nor do they need to be.

To any women on campus who were not able to attend, Barker extends these words: “The only way to be confident and at rest in yourself is to abide.”

Why the 49ers will win the Super Bowl 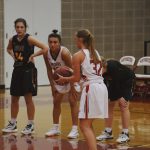