The women’s soccer team dominated this week, adding two wins to their record. Northwestern found victory against Dordt on Wednesday night with a score of 1-0.

The Raiders came out attacking early, but the game seemed to even out, NW getting a lot of shot attempts in but unable to sink one. Sophomore forward Tyler Farr once again led the team in shots with seven. As a team, NW led shots 22-9.

“The coaches were drilling into our heads that every player needed to shoot if they had the opportunity,” said junior midfielder Johannah Jensen.

Dordt began fighting back, but the NW defense was solid. The Raiders were applying constant pressure on the Defenders.

Finally, as it looked like there would be overtime, freshman forward Ashley Williamson scored the first goal of her collegiate career in the 70th minute.

“It was a great game and we deserved the win,” Jensen said. “It feels great to beat our rivals, especially with how hard we worked.”

The Raiders played Nebraska Wesleyan on Saturday and won in double overtime.

In double overtime junior Ann Calsbeek got a leading pass and broke away for a goal scoring opportunity. She was taken down in the box and the opponent was red carded. Farr then scored the penalty kick which gave the Raiders a golden goal win.

“I thought we played awesome all the way through,” Jensen said. “We did not give up and we had the drive to win and the outcome of the game reflected how hard we worked to get the win.”

The first half of the game was slow, but the Raiders came into the second half attacking and scored two goals early. Farr scored her fourth goal this season in the 50th minute, giving NW the lead. Freshman Mattie Ostrowski followed soon after with a goal assisted by freshman Michaela Gibson in the 69th.

Nebraska Wesleyan answered back by scoring two goals to tie it in the next 13 minutes. It threw the game into overtime where neither team was able to find the back of the net.

The women’s soccer team will play again at 5:30pm Tuesday in Sioux City against Morningside. 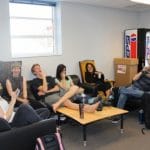