In light of singer Whitney Houston’s unexpected death, tributes were given throughout the evening by presenters as well as performers. Houston, being a six-time Grammy winner, has influenced the music industry profoundly for the past 25 years.

Host LL Cool J opened the ceremony announcing “We’ve had a death in our family. For me, the only thing that feels right is to open with a prayer.”

Jennifer Hudson was the only individual to pay tribute to her with a song, singing an a cappella version of Houston’s signature piece “I Will Always Love You.”

Other performances of the night included the Beach Boys who reunited for their 50th anniversary, after homages by Maroon 5 and Foster The People who performed “Surfer Girl” and “Wouldn’t It Be Nice” respectively.

Award-wise, the night belonged to Adele. The British 23 year old, who just recovered from vocal surgery, opened with an a cappella performance of “Rolling in the Deep.”

Beyond stunning in a custom black gown by Giorgio Armani, she won all the categories she was nominated for, including Best Pop Solo Performance, Best Pop Vocal Album, and swept all of the major categories, including the Best Song, Record and Album of the Year.

She became only the sixth artist in Grammy history to sweep all three major categories.

Other winners of the night included Kanye West, who did not attend, but had the most nominations, totaling seven. West won Best Rap Album for “My Beautiful Dark Twisted Fantasy,” Best Rap Performance for “Otis” and Best Rap/Collaboration for “All of the Lights.”

The night wasn’t a hit for all the performers however. Nicki Minaj walked down the red carpet with a “clergyman” and presented an exorcism-themed performance, which included a confession and video of her alter ego Roman Zolanski, all in light of debuting her new song “Roman’s Holiday.” The performance consisted of dancers dressed up as monks singing “O Come All Ye Faithful,” while Minaj was undergoing a “mental breakdown.” The audience seemed relieved when it was over.

Poor Nicki Minaj—the girl obviously was slow to learn the audience is more impressed by talent and class than show and spectacle. At least, that’s what the six Grammys given to Adele seemed to say. 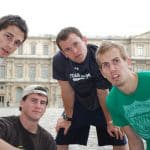