The once-popular Northwestern event, Airband, will be introduced to a new generation of students.

Airband is a competition where groups create a lip-syncing performance to a song or mix of songs.

“It is lip syncing, but not the band type of lip syncing,” said Aaron Beadner, Director of Student Programs.

Most students were still in high school when Airband last took place on campus four years ago. Some former students who remember it are now working for NW. There are a few current students who have heard about it from recent graduates.

“I remember Airband as a student,” said Drew Schmidt who graduated from NW in 2005 and is now the audiovisual technician at NW. “I did not participate but that was probably a good thing. I thought it was supposed to be just a band with air guitars, air drums and, most boring, air keys. Quite the contrary—it was acts choreographed to music in clever ways.”

“We looked at NBDC and felt like there was already Rush and that it was not going to be something different or unique,” Beadner said.

Airband is designed to be something that anyone can participate in whether or not they are good at performing.

“This event is different because it is open for everyone,” said sophomore Arynn Mazino who is in charge of the event. “If you are good at dancing you do rush or NBDC and if you’re good at singing you do NCDC. Airband

Participants can perform to songs from any genre, from Broadway musicals to America’s Top 40.

“It is a lot about the acting and trying to give off the impression that it is live,” Maznio said.

Participants are also free to use props and do stunts.

When Airband was on campus before, Heemstra had some of the most notable performances.

“Heemstra Hall actually had one of the few I still remember,” Schmidt said. “This was back in the day when their stuff was clever, not just avant garde.”

Schmidt recalled one such performance.

“They did a bit to ‘Eye of the Tiger’ with two pairs of guys,” Schmidt said. “One was dressed in pure black spandex. He disappeared in front of the black curtains. They did all sorts of tricks and lifts, kind of like fights from the movie ‘The Matrix.’ There’s nothing like the surprise that comes from the creativity of other people.”

In the coming years, SAC hopes to get more people involved in this event.

“It will take time for the campus to get involved because this is a new event,” Beadner said. “Eventually we would want to have more performers and less spectators. It would be great if it became a competition between groups on campus or even wings.”

Other colleges have lip-syncing events similar to Airband that have been very successful.

“Calvin and Taylor University each have [a lip-syncing performance] under different names that are essentially the same thing,” Beadner said.

This year, only six groups are involved in Airband.

“All of the groups have great ideas,” Beadner said. “One features nuns. There could be a Disney rendition or ’90s pop.”

“The judges will be more humorous, and they won’t decide the vote,” Mazino said. “We will have a variety of judges and it will be more on the entertainment side.”

Students will vote to determine the winner. 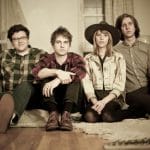 The Babies learn to work together