The women of No. 2 ranked Northwestern basketball fell to No. 8 ranked Briar Cliff Wednesday night 91-79. This marked the first conference game for both NW and Briar Cliff.

The two teams exchanged leads 11 times during a first half that ended 44-40 in favor of the host Chargers. The Raiders shot an impressive 53 percent from the floor, but failed to connect on any three pointers, going 0-9 from distance.

In the second half, the Raiders found themselves down 19 after a 26-11 Charger run before making a late surge and getting back to as close as nine points late in the second half.

“We have a lot of a talent on this team but also a lot of hard workers,” Kleinsasser said. “That will pay off for us in the long run if we continue to get better and work on the little things. We just have to take it one practice at a time and keep improving, and we’ll see what God has in store for our season.”

Last weekend, Northwestern hosted the Pizza Ranch Classic where the team went 1-1 over the course of the weekend. The Raiders fell to Indiana Wesleyan on Friday night 75-59.

De Jong led the team in scoring and notched 21 points on 8 of 13 shooting. Hutson added 14 points and six rebounds, while Kleinsasser added  nine points and eight rebounds. Indiana Wesleyan had the edge in field goal percentage with 50 percent, while the Raiders shot 46 percent from the floor.

On Saturday, the Raiders crushed Viterbo 82-36 in a decisive victory. The Raiders came out strong and led 48 to 16 at halftime. They continued their success at a lesser pace in the second half, but still outscored Viterbo 34-20.

“It was very important for us to come back strong on Saturday and respond the way we did to Friday’s loss because none of us enjoy losing,” Kleinsasser said.

The Raiders were led in scoring by De Jong with 18 points and Dunkelberger with 16 points. Hutson finished with a double-double, notching 12 points and 11 rebounds. Kleinsasser also scored 12 points.

The Raiders return to action at 2 p.m. tomorrow against GPAC rival Midland in Fremont, Neb. 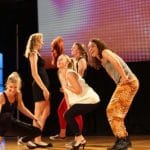