The Orange City Arts Department will host the Theatre Latte Da performing “All is Calm: The Christmas Truce of 1914” to honor veterans and their families.

The focus of the musical is Christmas Day 1914, the day thousands of men put down their guns during World War I and left their trenches to meet their enemies in No Man’s Land.

The musical opens with a German soldier stepping into No Man’s Land singing “Stille Nacht.” What comes after is an extraordinary night of camaraderie, music and peace.

The soldiers exchanged gifts, food and supplies, making the event one to be remembered as significant in history. It is a remarkable true story, told in the words and songs of the men who lived it.

Upon orders from above, the soldiers eventually returned to their trenches and reinstated a war that would last four more years.

Peter Rothstein, director of the musical, studied World War I in college, but did not learn of the Christmas Truce until he was selected as the director.

“If I had [learned of the Christmas Truce], I certainly would have remembered,” Rothstein said. “This extraordinary event took place in 1914, the first year of the war, and was never repeated.”

The performance includes trench songs and Christmas music from participating countries. The text for these songs was taken from a wide range of sources including letters, journals, official war documents, poetry and grave stone inscriptions.

Also helpful in creating the story from such a time period was the radio.

“Radio was critical to military operations; it was the primary means of mass communication and mass entertainment,” Rothstein said. “That’s why I decided that our piece would be a radio musical drama, using only the tools of radio: music and text.”

Those attending the musical may find themselves experiencing the truth of the story, feeling as though they are right there on the front line with those who lived it.

“I [was] interested in creating a performance where the content dictates the form,” Rothstein said. “In the creative process I continually asked myself: if the characters were left to their own devices, how would they tell their story? What language and tools were available to them?”

Due to support from The Gilchrist Foundation, Orange City Arts is able to offer half-price tickets to veterans and their spouses at $10. Admission for adults is $20, and $15 for students.

The evening is not only a tremendous celebration of the peace of Christmas, but a night to honor those who have sacrificed to bring that peace home to the nation. 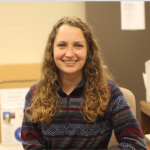