“Journalism? Is that even a major here?” Asking anyone other than Shelby Maznio, the answer would probably be a decisive “no.” Maznio will be the last student to graduate from Northwestern with a major in journalism, along with a graphic design major. Hailing from Buffalo, Minn., Maznio spends her days writing, designing, planning and drinking lots of coffee.

Maznio’s academic day begins between 6-6:15 a.m. Monday, Wednesday and Friday. After drinking a cup of coffee, Maznio heads to the Korver Visual Arts Center for her 7:45 a.m. drawing class. She spends an hour learning about different aspects of drawing, from sketching to paper studies.

At 10:40 a.m., Maznio heads to Graphic Design I, an introductory class to Photoshop and Adobe Illustrator — two programs Maznio already knows well. Art History is at 11:50 a.m. and involves the study of different art forms since the 1940s.

While Maznio is focusing primarily on fulfilling the requirements for her graphic design major this semester, one of her favorite journalism classes she has taken at NW is Media Writing. Through this class, she learned different styles of journalistic writing and discovered a love for writing feature articles.

“It’s not just about the facts and quotes, but writers can have a creative angle,” Maznio said. “It’s more like a story.”

Many afternoons, Maznio likes to spend her time at Town Square Coffeehouse, or “Old Factory” (as Maznio prefers), engaging in conversation, blogging, wedding planning or doing homework with a caramel macchiato in reach. Maznio also fills her time with Netflix and Hulu. Some of her favorite TV shows include “Grey’s Anatomy,” “This is Us,” “The Good Place” and “Downton Abbey”.

On Monday nights at 7 p.m., Maznio conducts Beacon planning meetings in the newspaper office, located in the North Suites basement.

“I love seeing the looks I get from people when I swipe my card because it’s a closed dorm night,” Maznio said.

As Editor-in-Chief of the Beacon, Maznio offers guidance to the team of editors as they plan for the following week’s issue. She provides a few story suggestions, other editors share their ideas and then the editors have to find writers and photographers.

“It makes the weeks go by fast since we’re always planning two weeks out,” Maznio said. “The only issue we currently have left to plan is The Ham.”

Following her Beacon meeting, Maznio heads to a resident assistant meeting from 8-10 p.m.

Thursday nights are consumed with Beacon layout. As soon as classes get out, Maznio and the editing team put the Beacon together and eat pizza with Maznio’s favorite Michael Bublé station playing in the background. Maznio is responsible for the final design edit, uploading the articles to the Beacon website and exporting the final master copy to the printer. At the start of the year, layout meetings went until 11 p.m., but now, Maznio finishes everything up around 8 p.m.

“Senior year is not busy at all,” Maznio said. “It’s very slow.”

Maznio may feel the year is passing slowly, but with plans for her senior art show underway and with her responsibilities as an RA and Beacon editor, a day in the life of Maznio is nothing short of busy. However, with a cup of coffee in hand, Maznio has both the energy and the passion necessary to fuel her through each day. 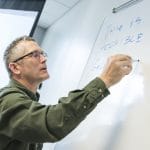