As the fall semester is on its last legs, the signs of Christmas break abound. Zwemer Hall tries it best to sound like h* Radio, Van Peursem Hall’s warmth becomes the closest thing to a tunnel on campus, and Colenbrander Hall begins preparation for its annual Coly Christmas Bash.

The Bash is popular throughout campus as the men of Coly decorate their wings in various Christmas themes and the spectators are led through the different worlds. At the end, attendees can vote for their favorite wing over a cup of hot chocolate.

Despite the good cheer intended, last year’s edition of the spectacle featured controversy from incidents on two wings.

The first came on the east wing of second floor. Second East’s theme was giving “prospective students” a glimpse of what faculty and staff would be doing over break. The impersonations included admissions counselors, professors and maintenance staff. What caused a stir was the depiction of former business professor Ranjan George, who was being portrayed by sophomore Sam Rall.

The men of Second East painted Rall’s face black to more closely resemble George’s complexion. The painting was done to make the act more believable; similarly other actors on the wing cut their hair or stuffed their shirts with pillows to better impersonate the faculty and staff.

“I did it to make it more lifelike,” Rall said. “His skin color was neither a positive nor a negative thing to me. It was just a part of him. We were all unaware that the whole ‘blackface’ thing could have racist connotations.”

A few resident directors and Multi-Ethnic Student Counselor Rahn Franklin were some of the first people through the dorm, and they made the decision to ask Rall to wash the paint off his body.

“The ‘blackface’ has been used in theater to depict characteristics of blacks in humorous ways,” Franklin said. “In short terms, it was a way to make fun of blacks and perpetuate a number of stereotypes.”

Rall and the others on the wing were unaware of the negative history associated with whites painting their faces to appear black. As time has passed, it has become clear the potentially offensive depiction of George was unintentional ignorance by the wing.

The other talking point from last year came from First East. The wing has long had the nickname of “The Ghetto” and has traditionally had a “Christmas in the Ghetto” theme for Coly Christmas.

Junior Micah Czirr was the resident assistant on the wing. According to him, he and his wing attempted to make light of situations found in under-resourced neighborhoods. Participants were not asked to stop the act during the performance time.

“A lot of people thought we were singling out the black people on the wing,” Czirr said. “That wasn’t the intention. We had a number of guys who had lived in or near real-life ghettos before college. For some of them the humor in it is a way to deal with that reality.”

The line of what can and cannot be done in good taste is subjective, but Franklin said the drug handouts and interracial violence can perpetuate harmful stereotypes and incidents such as the Rodney King beatings.

“We have to think about the ripple effect and the impact we are having on the people who see it,” Franklin said. “Especially in an event like this that is open to the community, we have to be aware of how we are depicting [NW’s] community to others.”

Coly’s resident director, Ryan Anderson, said he doesn’t believe last year’s trouble has taken anything away from the event. He has talked to the resident assistants about the greater understanding that has come from it and encouraged dorm leaders to be more thoughtful in theme choice this year.

“We’re trying to be more sensitive in how we choose themes,” Anderson said. “We have to take responsibility for our actions and be more thoughtful in the acts we choose.”

The Coly Christmas Bash will take place on Monday, Dec. 3. Doors will open at

9 p.m. and close at 11 p.m. Admission is $1, and hot chocolate will be available in the game room while students vote following their trip through the dorm. 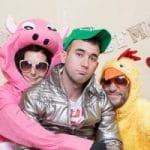 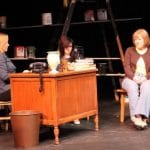 Original play to premiere at NW