On a campus like Northwestern, swearing is seen in a different light—is it something that Christians should engage in?

Many would argue the reason against swearing is simply that foul language is a sin.

However, many students on campus feel that it is the motivation behind this decision that we should be focusing on, not simply the language itself.

Senior Megan Herlyn recalls witnessing her CEO swearing only in situations of frustration and feeling that it caused her a reaction of intimidation and authority.

“Isn’t there other words that could be used?” Herlyn asked. “It’s so hard to tell if something like [swearing] is conscious or not. I know that substitutes are pretty much the same thing, but when you’re so used to hearing it around you, sometimes it just slips out.The people around you have such a big influence on you. And vice versa.”

In fields such as sports that have such a variety of emotions, including both anger and joy, it’s not uncommon to hear swearing.

“Swearing does happen on the field, just as any other place,” said senior Jayme Rozeboom. “Football is such a passionate game. People tend to let their guard down and play with their emotions on their sleeves. I’m not a big fan [of swearing], but I’m not really fazed by it either.It’s tough for us not to swear because it’s so accepted.”

Then there are some for whom swearing is another form of local rhetoric.

Junior Michael Simmelink grew up in Emmetsberg, where swearing was prevalent throughout the community, including teachers, coaches and other people that everyone knew.

Emmetsberg is seen as a town of hard working individuals, most of whom are professing Christians, but where swearing “just wasn’t that looked down upon for most people,” Simmelink said.

“A lot of my friends were farm kids, and they always swore because their dads always swore around them. When my friend Nate said he got dog s*** on his shoes and got in trouble in elementary school, there was a reason he didn’t get grounded by his parents. It was just another word to him,” Simmelink said. “My parents were definitely the minority in being sticklers [about language].”

Senior Devon Cadwell also recalls growing up in a place where swearing was not seen as very offensive, but used more as language to describe.

Cadwell focuses on the difference between swearing coming from a place of hatred compared to it being seen as just a word.

He remembers working at a restaurant in Nebraska where the regulars swore all the time, but were some of the nicest people he’d ever met.

“Our impression of language doesn’t always reflect the inner person –some really caring people swear, while others are selfish and gossip but considered to have ‘clean lips,’” Cadwell said.

“People, being from different places, are going to talk differently,” Cadwell said. “You can’t just ask them to change that. Can you imagine if everyone talked the same way and were synonymous? We can’t avoid one another or point fingers because that’s not how we grew up, or have the ‘my way is right’ mentality and not even listen. If we judged a person by the way they talk, we could miss out on a much deeper connection.”

He pointed out that not everyone finds swearing offensive, and not everyone who swears is trying to be offensive with their words.

“I wouldn’t swear around children—there is a time and place,” Cadwell said. “I would also respect if someone saw [swearing] as their vice and were tempted by being around it. But if people think that it’s offensive, I’d like to know why—especially if they tell me not to talk that way. What right do people have to tell someone else how to talk?”

NW’s campus seems to be focusing less on the language itself and more on the approach and motivation that prompts the word choices we use to describe situations and with each other.

“Ultimately what it comes down to is communication, and it’s the attitude that matters,” Cadwell said.

In the end, each person has to decide if their use of language is appropriate in the situation and if their words are being used to show love or hate. 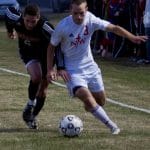