Not everyone wakes up and thinks, “I might just enter an online modeling contest today.”

Neither was this the case for Northwestern senior Graham Kinsinger. Yet currently, he sits in third place in an online contest hosted by American Eagle that began this summer.

American Eagle started the contest as part of a jean campaign for the coming spring, in hopes of finding new models to sport its apparel, especially its various styles of jeans.

“Nudged by my girlfriend, I figured I might as well,” Kinsinger said when asked how he got into the modeling business.

The contest spanned four weeks, with one finalist emerging from each week. Each style category narrowed down their search to four candidates.

Based on the profile he created, Kinsinger was selected as the week-three finalist in the “boot cut” category determined by the public vote.

“I didn’t go crazy promoting the project; I felt a little sheepish about the fact that it was a modeling campaign,” Kinsinger said.

Despite a lack of self-promotion, Kinsinger made it into the final three for his category. The American Eagle website is tallying votes and will release the winning models sometime in the near future.

Over the course of the voting, the website displayed the percentage of votes that each contestant was receiving. Kinsinger’s percentage had him sitting in third place.

Kinsinger assumes this placement will be the final outcome, but the results are still pending.

“The top two guys made use of a marketing tactic that I failed to utilize: shirtless pictures,” Kinsinger said.

Kinsinger is not hurt by his standing; his attitude toward the contest was purely recreational.

He wasn’t “pouring his everything into this”—just one of those random occurrences in which one says, “I’ll give it a shot.”

“I never suspected I would come anywhere near where I did,” Kinsinger said. “I’m not hurt by a third place finish.”

“People will be happy to know that I’m still working towards completing my college degree,” he said. “My career options aren’t ruined if I don’t finish first in an American Eagle modeling contest.” 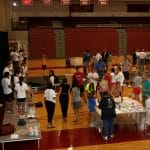