Art is a visual process.

This is a statement that senior art major Jordan Rae Van Dyke has been led to question for the past year, and has decided to address in her solo art showcase.

“As someone who loves Jesus and makes art, I believe we are not only physical, flesh and blood, but spiritual beings as well,” Van Dyke said. “I’m exploring the connection and balance between the physicality of making objects and my own spirituality.”

Van Dyke approaches this idea in a very unique way: She creates all of her paintings while blindfolded.

“By taking away my sight, I limit my dependence on vision,” Van Dyke said. “This balances out my physical and spiritual senses. Think of it this way: Why do many Christians close their eyes during prayer? Closing your eyes limits the distractions and provides a freedom to focus on the spiritual realm.”

Van Dyke said that her work is conceptual, and that she tries to place more of a focus on the process of creating pieces and the experience they give viewers rather than the actual image that comes to exist.

Van Dyke’s show consists of six 4-by-4 foot paintings evenly spaced across the gallery. Each piece is done in thick gray acrylic paint and joint compound on panel so that Van Dyke can easily form it simply by feel.

Pressed into the paint are markings moving across the image from left to right.

At first these markings seem to be cursive words, but on further inspection viewers realize that they are a mish-mash of letters and various markings.

“By carving these words I hope to bring attention to the physicality of our written words, but also hint at the spiritual nature of the spoken word,” Van Dyke said. “As I carve these words into the paint, I speak the words out loud.”

Though the pieces are rather similar, each of the six squares holds a slightly different aesthetic feel. Some are covered in large looping letters, while some sport a more scratch-like scrawl. Most are entirely covered in text, but one piece sports a single line running across the canvas. These variances add another level of interest to the show.

Another captivating aspect of Van Dyke’s show is the fact that she has not, and will not, see the pieces she has created for the show. Even during her public reception, Van Dyke has chosen to stay in the hall outside of the gallery.

The show will be featured in Te Paske Gallery until April 3. A public reception will be held at 7 p.m. Friday, March 30. Van Dyke will be there answering questions. 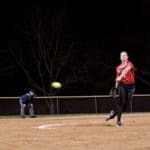