“Fighting with My Family” is a biographical sports comedy-drama set in the hard world of the world wrestling entertainment (WWE). It’s sprinkled with cheap laughs and poorly developed side characters, but if you’re looking for a movie to give you anxiety and make you cry, this is the one for you.

Based on a true story, “Fighting with My Family” centers around Saraya Knight (Florence Pugh) and her English family who make a living performing wrestling shows in the small town of Norwich. Her family is ecstatic when she and her brother, Zak (Jack Lowden), get a chance to try out for the WWE; but trouble brews when Saraya makes it and Zak doesn’t.

The family splits as Saraya, now going by Paige, flies to Florida to train, and Zak spins out of control back in England. But Paige is thrown into a world that causes her to question her dreams.

The first 15 minutes were spent on poor humor and a heartwarming scene with a blind kid (but mostly dirty jokes) in an attempt to hammer home how the Knight family interacts with the world; they are rough around the edges, but they truly care for each other and the people around them.

In Florida, Paige is the underdog because she’s not tall, blonde or tan, but it’s hard to root for her because she assumes she’s the only one with real experience. She thinks the other girls are just there to be famous and wear bikinis, but she never bothers to actually get to know them until much later in the movie.

Paige goes back to England after deciding that wrestling won’t work out; she tells Zak, who doesn’t take it well, and goes completely off script during their fight, almost seriously injuring Paige. Zak reminds her that she’s doing this for her family, and at one point it was her dream, too. Paige becomes the protector of the outcast and the struggling through the rest of the movie, sticking to her family’s values and accepting who she really is.

The movie was heart warming and preached a message of acceptance and determination. Pugh and Lowden did phenomenal jobs with their characters – they were believable.

All the other characters were very one-dimensional, shallow characters that didn’t translate on the screen in a relatable way most of the time. There were also several characters whose sole purpose was to make a crude joke in one scene and then never come on screen again.

The scenes of Zak doing crazy stunts after he was rejected from the WWE made me physically curl in my seat and cover my eyes.

However, it has a 92 percent on Rotten Tomatoes and seems to have been received well by critics, reaching just over 21 million in domestic box office sales as of March 18.

The movie did provide spots for the real Knight family to come in, which was cool to see. Home videos played during the end credits revealed not only that casting was fairly accurate, but it appears that director Stephen Merchant stuck close to the source material.

Overall, the latter half was mostly enjoyable and had an inspiring ending. 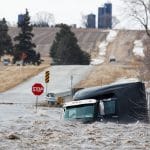