Finding the perfect Christmas gift for friends and loved ones can be a challenge. But this year, junior Jeremy Bork and sophmore Josh Hollinger, along with freshmen Noah Hollinger and Taylor Johnston have provided an easy and affordable solution.

Over the past month, the quartet, along with other North Suites residents, have been working on a Christmas album titled “I Would Merry Christmas If I Could.”

“A month ago, three of my friends and I recorded a song just for the fun of it,” Bork said. “Then we decided to make a Christmas album. We are recording covers of Christmas songs, and there are also a few originals.”

Bork, who has been recording music for almost three years, is heading up the musical operation.

With over a dozen songs recorded so far and over a dozen people contributing, the album promises not to disappoint listeners.

“I think a lot of people will be surprised with [the album],” Noah Hollinger said. “I feel like it’s a pretty high quality product. It shows a lot of different styles of music from dance, to classical, to acoustic, to rock and even some things that are completely ridiculous.”

As far as a favorite song goes, Josh Hollinger says it’s hard to choose because there are so many different people and genres involved.

“If I had to mention one, I’d say Jeremy Bork’s ‘From the Pole to the Suites,’” Josh Hollinger said. “It’s his original, and our goal is to get the song played at Winter Formal. We even have a dance to go with it.”

Johnston enjoys the atmosphere that goes with recording and putting the album together. He says he first got involved for the fun that the project offered.

“We have a lot of musically talented people in North, and it’s been fun to see them come together to work on the album,” Johnston said.

With the mix of people included, the album needed a unique title as well.

“Noah and I were sitting in our room late one night thinking of a title,” Johnston said. “He wanted to come up with a play on words, and he came up with ‘I Would Merry Christmas If I Could.’”

For these guys, putting an album together is more than just sharing Christmas songs. It’s about sharing the Christmas spirit.

“We are doing this so we can raise money for [the charity] Angel Tree,” Bork said. Angel Tree provides Christmas gifts to children who otherwise might miss out on gifts. 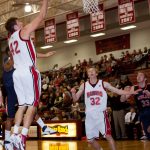