At Northwestern College, several students have parents who work as professors. Vanessa Stokes, Kitrick Fynaardt, Emily Van Peursem and Noah Minnick give a look into their lives as professors’ kids.

Vanessa Stokes is a sophomore writing and rhetoric/public relations double major and her mother is a professor in the social work department. She has never taken a class with her mother, but her friend has “rave[d] about my mom as her professor for over an hour.” Stokes’ father is also part of the staff at NW in the audio-visual department, and Stokes works for him multiple days per week. Stokes says her father is a jokester, like in this story she gave: “My dad likes to jump scare me, and so he did just that in front of a table of my friends in the cafeteria, which made me almost choke up my water.”

She says her father embarrasses her sometimes, but she enjoys having parents on the faculty/staff because they know the ins and outs of the college.

Kitrick Fynaardt is a sophomore mathematics major and his father, Dr. Keith Fynaardt, teaches English. Kitrick has taken literature and film with his dad and says that “he brings literature to a level where everyone can participate and understand.”

Pros of having a professor for a father include the free tuition, having a free washer and dryer within driving distance and having an instant talking point with anyone who has taken his class.

When asked if he’d had any funny stories to share, Kitrick said, “One time I was walking through Kepp Hall to fix one of the printers in the building when I walked past my dad’s FYS section while they were in class. My dad waved me into the room and had me stand in front of the class and said, ‘This is what a college sophomore looks like, look how put together and on top of things he looks!’ I burst out laughing at the absurdity of such a statement and the freshmen in his class applauded me for some reason. All in all, just a very bizarre interaction.”

Emily Van Peursem is a sophomore elementary education major with reading and early childhood/special education endorsements. Her mother Donna is a professor of social work.

When asked about how having a professor as a parent feels, Van Peursem said, “I was not too thrilled about the idea of going to a college where my mom worked.” But after being here for a year she says, “I love it here and actually love having my mom on campus. Sometimes she even takes my laundry home and brings it back the next day!” she said.

“Overall, I do love having my mom here at college. She really does know me better than I know myself and I am so so thankful for her. She is truly passionate about social work and teaching and puts in a lot of effort to be the best professor that she can be for her classes and students,” Van Peursem said.

Noah Minnick is a sophomore elementary education major and his mother, Ann, is a public relations professor and his dad is Director of the Career Development Center. He’s never taken a class from his mother but he says that “It is probably a good thing, because I think I would not take it seriously and give her a lot of grief.”

Pros for Minnick would be that his parents know everything about how Northwestern works and can help him with Blackboard, among other things.

When asked about fun interactions he had with his mother, Minnick said, “The experience I have had with my mom that was awkward was first semester of my freshman year and running into her in the hallway. I was walking from class in VPH and our paths crossed,” he said.

“I stopped to talk to her and as we parted ways, she tried to hug me and give me a kiss. Keep in mind, the hallway was full, and I thought it was really embarrassing. She then yelled, ‘Oops, I probably shouldn’t hug you and kiss you here!’ But know we can laugh about it!” 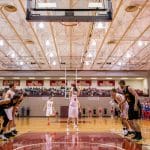 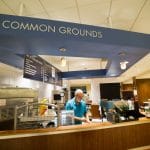