Going into this movie, I didn’t have high expectations, but I have to admit that I was captivated within the first half hour.

“Real Steel” stars Hugh Jackman as Charlie Kenton and Dakota Goyo as his estranged son Max. Set in the year 2020, Charlie, an almost title-winning boxer in his prime, attempts to get out of his slump by fighting high-tech robots in the underground boxing scene.

However, the focus isn’t on these thousand pound scraps of metal.

Beginning with his moral compass pointing south, Jackman engages the viewer through his questionable parenting and comical relationship with his son.

The movie is somewhat corny and predictable, but the rough edges and moments of tension between father and son manage to be emotional without being completely cliché, not to mention rolled up with sports and sci-fi thrills.

The advancing link between humans and robots in the film also brings the question of the relationship between faith and technology.

All in all, this movie is a knockout.

Red Raiders get revenge on Dordt 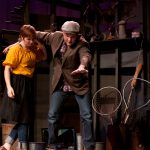