“I think it is a cool experience that I probably won’t get ever again. It’s the first time I get to vote so I’m pretty pumped about being involved in that. I think even if you are for or against Romney, this is just a great opportunity to educate yourself and get involved in politics.”

“It was scary, him standing up there telling us to vote straight ticket without thinking about anything. The whole production is just interesting.”

“I shook Romney’s hand four years ago. I hoped he’d get the nomination then. I was in Afghanistan when Obama was threatening to veto any temporary budget, so we didn’t get paid for a week. I’m ready to get someone in office who is considerate of that.”

“It was ironic how easily people were swayed into idolatry of a political candidate.”

“We didn’t know they were here Thursday. It happened Friday. Then Friday night at the hoedown it felt like Northwestern’s campus again.”

“I liked that Romney talked about students.” – Freshman Daniel Dowdy

“I am here tonight and will be there tomorrow because I believe that Mitt Romney is the best choice for this time because he has the experience in terms of the economy and he has lived an extremely moral life. And I also really like Paul Ryan.”

“I enjoyed being able to hear Romney speak on campus but I think what made the experience even better was that I was able to shake the hand of a potential president of the United States.” – Junior Gretchen Sutherland

“I like how [Romney] was genuine and he directed his speech and the location he was at. He didn’t just do a generic speech. He talked to the people in Northwest Iowa, students, farmers, all the manufactures, and that’s what I liked so much. I really think, in my personal view, representing myself, I think he’s going to really help the students out and help students find jobs. And I think he really has the potential to start the United states on a great path. Go USA.”

“We witnessed the ‘tornado of idiocy’ that is American politics.” – Jeff Van Der Werff, professor of political science 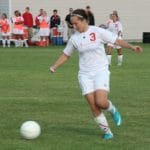 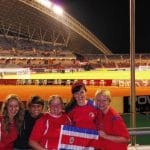