Northwestern senior Tamara Smith and junior Jasmine Smith have a father who is Christian and a mother who is Buddhist. When the sisters were young, their mother set aside a room for a shrine to Buddha.

“All we knew was that Mommy does her thing and it’s not right,” Jasmine said. “We went to church and Mommy did her own thing, which was wrong.”

Tamara and Jasmine’s mother met their father when he was a naval officer stationed in Hawaii. Over his naval career, the Smith family lived in Guam and Washington before moving to Iowa.

“My dad was the head of the house, so he got the final say on our religion,” Jasmine said.

On the other hand, attending church with their father was sometimes less peaceful for Tamara and Jasmine. Other churchgoers knew their mother followed Buddhism and often pressured them to convert her to Christianity.

“Many nights, I cried myself to sleep,”Jasmine said. “People at church literally told me that my mom would burn in hell unless I did something about it.”

In high school, Jasmine tried many times to convert her mother. Jasmine’s father bought his wife a Bible translated into Thai, her native language, but she never read it.

Jasmine’s mother, however, never made efforts to convert her family to Buddhism. Because the religion places more emphasis on living a virtuous life than confessing particular spiritual beliefs, she wasn’t opposed to raising her children as Christians.

“According to Buddhism, being a good person is what matters,” Jasmine said. “Since Christians are supposed to be good people, it didn’t make a difference to her.”

In recent years, Jasmine and Tamara have begun taking an interest in their mother’s beliefs.

When Jasmine visits her mother, she participates in prayers to Buddha. However, her goal is not to connect with the awakened one, but with her mother.

“By praying to Buddha with my mom, I gain a better understanding of who she is and where she comes from,” Jasmine said.

Jasmine also has a pamphlet of Buddhist scripture from her mother. She carries it in her purse to remind her of her mother.

“When it comes to religion,” Jasmine said. “My mom’s beliefs have given me a more universal perspective. It’s caused me to ask questions.” 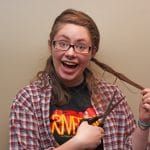